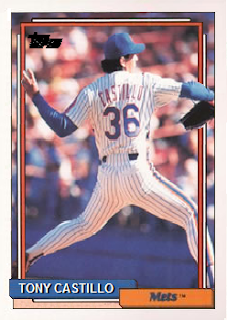 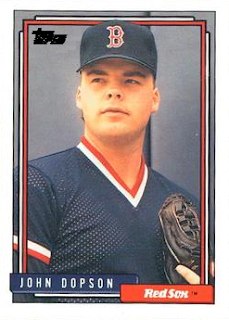 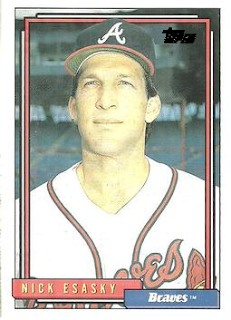 I don't know how I stumbled upon it, but the other day, I came upon a picture of Nick Esasky's 1992 O-Pee-Chee card, and realized that I somehow didn't include him in my '92 Topps set. I decided to go 1 by 1 through the '92 OPC set and make sure I didn't skip anyone else. While doing so, I realized that I missed John Dopson as well. I also saw that Jim Schaefer had a '92 OPC card (I had used another photo to create his '92 card. I decided to leave the Shaefer card as is.
Then, while I was organizing my binders the other day, I realized that I had made Tony Castillo's '92 card as an Atlanta Brave when he really finished the '91 season as a New York Met, so I made a corrected version of that card.
I believe with these 3 corrections that the 1992 Topps set is now complete, and stands at 1366 cards.
Eventually I will get back to working on the backs of the cards, maybe once the craziness of the holidays subsides. Thanks for checking out my blog, and if you see any more cards I forgot or need to change let me know.
-Jeremy

Posted by Jeremya1um at 8:04 AM No comments: