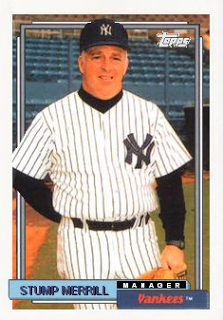 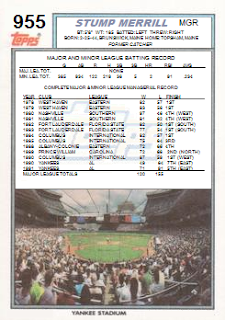 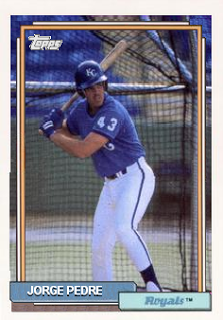 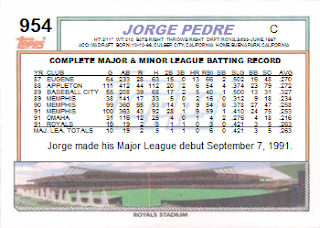 I have just finished making 2 of Pedre's cards recently, as he was in the last part of my 1993 Topps set, and the first part of my 1992 Topps Traded set. Since the 1991 Topps Traded card was the only one he was missing to complete his career Topps run, I created it to give you every Topps card of Pedre. 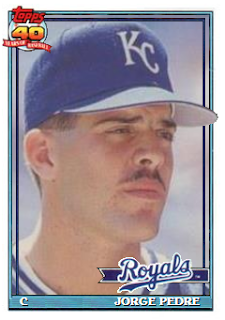 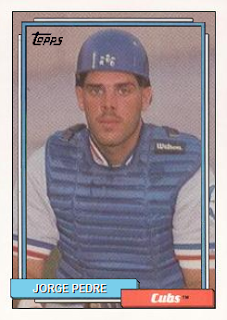 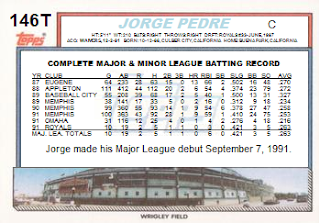 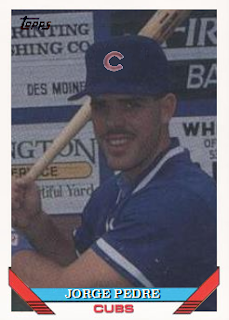 Jorge didn't appear in very many mainstream issues. While appearing on a few minor league issues, Jorge only had a 1992 Topps Debut and 1992 Score card. These 4 Topps issues will add to that.
I'm slowly working away at the 1992 Topps Traded set, and have finished the Atlanta Braves and the Chicago Cubs team sets. Hopefully that will come along more quickly.
Thanks for taking the time to check out my latest post.
-Jeremy

Posted by Jeremya1um at 1:28 PM No comments: 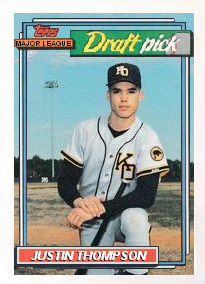 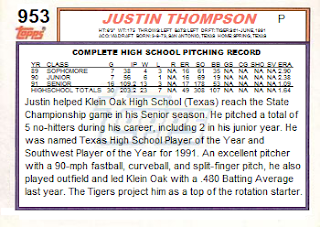 Justin Thompson played in the Major Leagues from 1996 to 1999, and once more in the 2005 season. He was selected in the first round of the 1991 MLB Draft by the Detroit Tigers, and got called up by Detroit in 1996. He stayed with them through the end of the 1999 season, and was traded to the Texas Rangers with Gabe Kapler and Frank Catalanotto for Juan Gonzalez. He suffered a torn rotator cuff, and missed the '00 and '01 seasons, but returned to the Majors in 2005 with the Rangers.
Justin Thompson's card resume is kind of funny. He didn't get into the 1992 Topps set (although he should have as a #1 Draft Pick), and he has a few cards made in seasons which he didn't play at all. Let's take a look.
Justin got his first Topps card in the 1994 set, in the Future Stars subset. His next Topps card was in the 1997 set. He got into the 1998 set, the 1999 set, and the 2000 set, which featured him pictured as a Ranger. Interestingly, like the 1994 set, when he got a card and didn't play in a game for the season before or during the year of the set, Justin got a 2001 Topps card. This would be Justin's final Topps card.
Thompson is missing cards from the 1992, 1996 Traded, 2000 (picturing him as a Tiger), 2005 Update, and 2006 Topps sets. My '92 Topps card gets his rookie card finished, and leave Justin with only 4 cards needed to finish his career Topps run.
I am currently working on finishing the 1992 Topps Traded set (fronts and backs), and I will add those to the complete set page, and if I ever get this blog finished and run through the main set, I will start with the Traded set.
Thanks for checking out my latest post.
-Jeremy
Posted by Jeremya1um at 12:56 PM No comments: 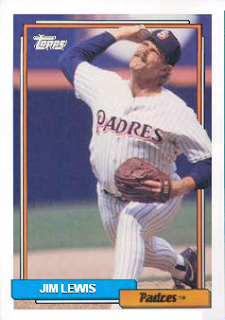 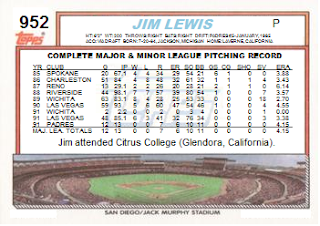 Jim Lewis played one season in the Majors, spending 12 games in the 1991 season with the San Diego Padres, going 0-0, with 10 Strikeouts and a 4.15 ERA. Nothing earth-shattering, but better than I could do.
Jim didn't appear on many card at all, including minor league ones. His only major issues were found in the 1992 Fleer set, the 1992 Score set, and the 1992 Topps Debut set. Surprised he didn't appear on the Stadium Club set or on a Bowman set in either 1991 or 1992.
Lewis is only missing 2 Topps cards, a 1991 Topps Traded one, and one from the 1992 Topps set. Since it is only 1 card, I whipped one up real quick, so here is Lewis's 2nd missing Topps card, completing his career Topps run. 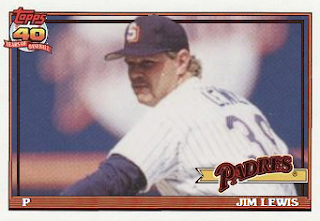 Thanks for checking out my latest post.
-Jeremy
Posted by Jeremya1um at 3:11 PM No comments: 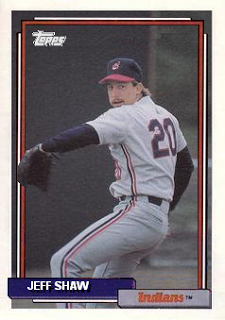 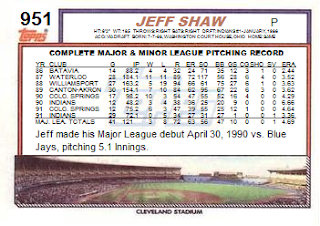 Jeff Shaw pitched in the Majors from 1990 to 2001. He pitched his first 3 years with the Cleveland Indians. He spent 1993 and 1994 with the Montreal Expos. He split 1995 with the Expos and Chicago White Sox, before leaving for the Cincinnati Reds. He spent 1996 and 1997 with them, before being traded to the Los Angeles Dodgers during the 1998 season. He spent the rest of his career with them before retiring after the 2001 season. His baseball life doesn't end there, as his son Travis now plays for the Blue Jays. 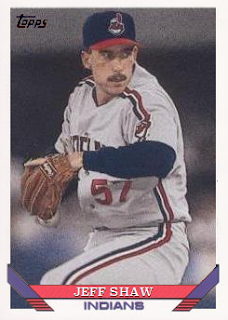 That about does it for today. Thanks for checking out my latest post.
-Jeremy
Posted by Jeremya1um at 1:43 PM No comments: 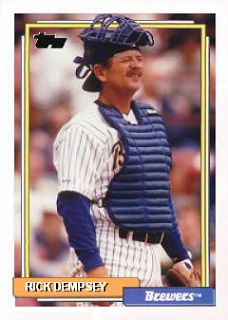 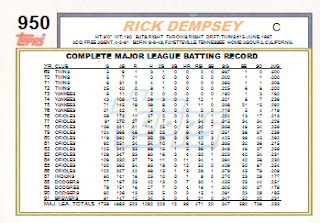 Been awhile since I've posted here, but I'm still plugging away. Here's the latest 1992 Topps custom.

Rick Dempsey was one of just a handful of people to play in the Majors in 4 different decades. He came up in 1969 with the Minnesota Twins. He played with them through the 1972 season. He played with the New York Yankees from 1973 to June 1976 when he was traded to the Baltimore Orioles, the team he is most famous for playing with. He was with them for a decade, staying with them through the 1986 season, and winning World Series MVP in 1983 during their World Championship season. He was with the Cleveland Indians for the 1987 season, spent 1988 through 1990 with the Los Angeles Dodgers, serving as the backup catcher in 1988, when they won the World Series. After spending the 1991 season with the Milwaukee Brewers, he returned to the Orioles for the 1992 season, his last. After playing, he got into coaching, serving with the Dodgers for the 1999 and 2000 seasons, and with the Baltimore Orioles from 2005 to 2006. 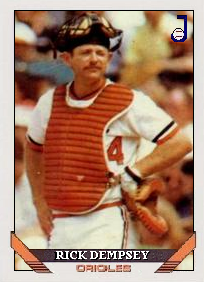 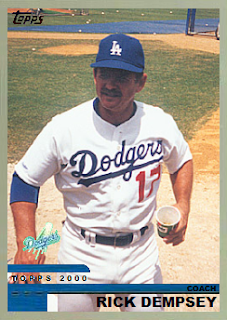 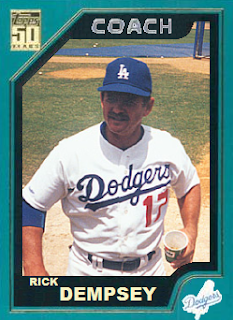 Thanks for checking out my latest post.
-Jeremy
Posted by Jeremya1um at 12:22 PM No comments: 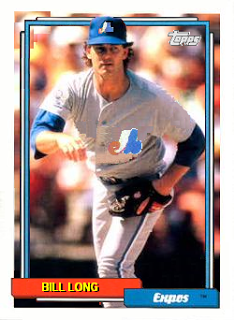 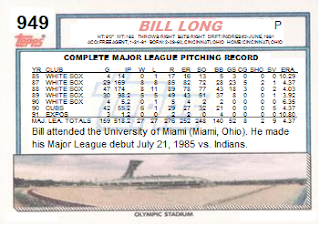 Thanks for checking out my latest post.
-Jeremy
Posted by Jeremya1um at 8:45 AM No comments: