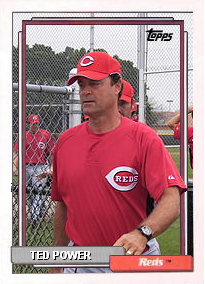 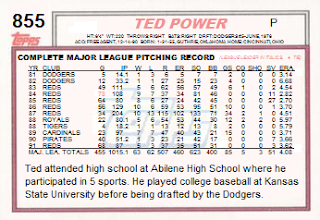 It was hard finding a photo of Ted from his second stint with the Reds, and I think this photo may actually be from his coaching career. His hat looks like a newer-style hat, and it looks like a wedding ring on his left hand, which I don't believe he would be wearing if he were a player and not a coach. Other than that, I'm happy with the card.

This should be my last post for a week or so. I will be going on a cruise at the end of the week, and am either working or at a doctors appointment the rest of the week. I worked on a ton of backs in the last 2 days, and have now completed the backs of every coach card. The next card I will be doing a back to is card #1294, and I have only 42 more cards left to make backs to and the set will be complete. Maybe sometime in the next month or so.

Thanks for checking out the latest card.
-Jeremy
Posted by Jeremya1um at 6:45 PM 2 comments: 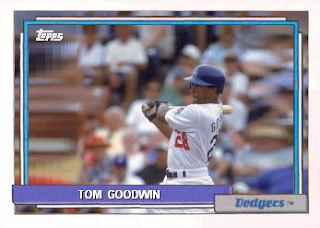 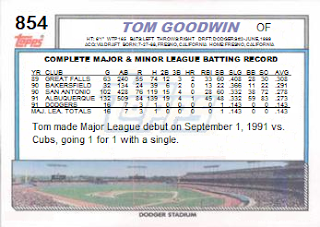 Tom Goodwin was called up to the Majors in September 1991 when the rosters expanded, and made his MLB debut on the 1st. He appeared in the '92 Topps debut set, but the regular Topps issue passed on him.

Tom appeared on many more cards throughout his long MLB career, including his first regular Topps issue in 1993, which I was lucky enough to get signed while he was in Spring Training with the Royals in the mid-'90's. I think I still have it in one of my favorite card binders.

This card was a little difficult to make becuase the only suitable Dodgers photos I could find of Tom were from his 2nd appearance with the club where the uniforms are different. I think I got this one off of another card, but had to really stretch out the sides to make the photo work.

I finished the backs to every coach in the American League today, and started on the NL teams and did the Braves and Cubs. That leaves me with only 108 more backs to go, and I'm happy to say that the coach cards are going alot faster than I thought they would. Only 10 more teams to go, and I will be done with every coach card, with just a few draft picks, award winners, 3 managers, a few highlights, executives, and some random player cards and the set will be done. Thanks for checking out the latest card.
-Jeremy 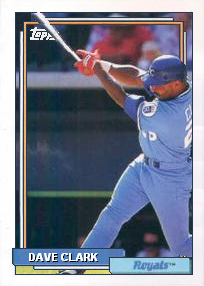 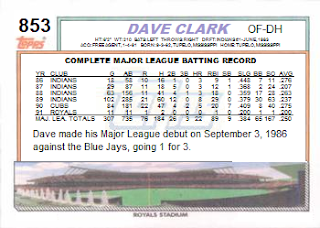 Dave Clark was primarily a pinch hitter and reserve outfielder from 1986-1998. He appeared on Topps cards from 1988-1991, and then again in 1994 (Traded) and 1995. He missed out on a good number of cards due to his role as a reserve, but he probably could've made an argument to get in the 1987 set after his rookie season. He also could've perhaps been placed in the '93 Traded set as well. Topps made Traded sets during the last 2 years he appeared on cards, but stopped after 1995, then didn't start again until 1999 after he retired. Perhaps I will try to make Dave's 1993 and 1996-1999 cards in the future, and maybe some coach cards if I can find photos. Dave coached for a while in the Astros (even managing them in late 2009), and is currently a coach for the Tigers.

Clark didn't get into many games in 1991 (only 11), so it's easy to see why he didn't get a '92 Topps card. He somehow managed to get into the '92 Score set, and he may have the record for fewest '92 cards from other brands out of guys in my set. I couldn't even find another good photo of him as a Royal, so I had to use the one on his Score card.

A few cards in the 1992 Topps set have players or bats or balls covering up part of the Topps logo (I believe Nolan Ryan and Bill Gullickson were some), so I did that with Clark's bat on this card just to pay homage to a small detail in the set that only a true '92 Topps fan would pick up on.

I'm off later today, so I should have the chance to work on backs. Currently, I'm done with the Royals coaches, so that puts me around card 1175 I believe. I counted and including some backs to cards I've done later in the set, I only have 152 more to go to complete the set. I should be able to knock that number lower in the coming days. The end is so close I can smell it.
Thanks for checking out my latest card.
-Jeremy
Posted by Jeremya1um at 8:25 PM No comments: 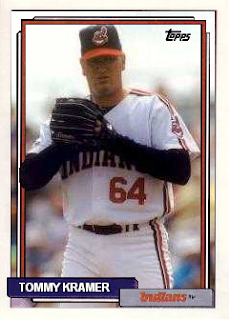 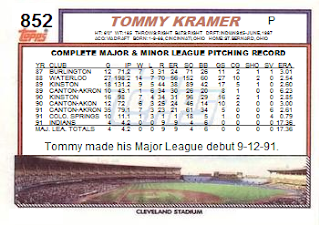 Kramer actually was pretty decent in 1993, pitching a one-hitter against the White Soc, and I was surprised he didn't play beyond '93, but the Indians had some great pitchers in 1994 (Denny Martinez, Charles Nagy, Jack McDowell) and would get some solid pitching from Orel Hershiser, Albie Lopez, and Chad Ogea in addition in 1995, so I guess the Indians staff didn't have much room for Kramer.

I only have 2 more backs to do until I hit the coach cards. Might get to them today if I have time after work, but if not, I have half a day free on Thursday and the whole day off on Friday, so I will work on backs then. Saturday I will have the chance to meet one of my musical heroes, Joel Hanson at a concert in Jacksonville. He was the lead singer/guitarist for '90's Christian-rock band PfR. He's playing in the house band for a few artists and I got tickets for me and my wife. I love his smooth tenor voice and loved listening to his guitar riffs and solos when he was with PfR. I would love to have had it just been him at the concert, but I'm hoping he will at least sing backup and have some guitar solos during the show. I'm hoping to get a guitar pick and maybe talk with him about music theory a bit, but well see how it goes. Next few weekends will be busy with concerts, doctor appointments, and a cruise in a few weeks, but I'll try to make a few posts and give updates on where the set stands.

Thanks for checking out my latest post.
-Jeremy
Posted by Jeremya1um at 8:21 AM No comments: 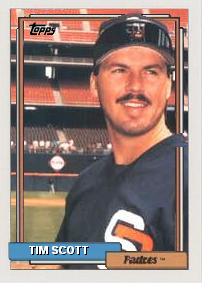 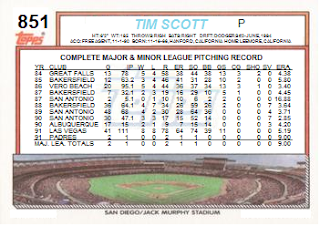 I need to edit this card, as part of his jersey stuck through the vertical lines on the right side of the card, but that shouldn't be too difficult to change. I actually have went through all the fronts of cards and put them in a file and made changes I needed to, so I don't know how I missed this one.

I finished the back of card #1130 today. If my count is correct, I only need to finish backs to 205 more cards, which basically are coaches, a few managers, some draft picks, award winners, highlight cards, and a few random players. I work 5 days in a row, but I'm hoping to have energy on Thursday and Friday of next week to get on some backs, and at least get to some coach cards, and perhaps even get a team or two of coaches done. Thanks for checking out the latest card.
-Jeremy 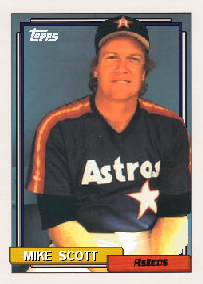 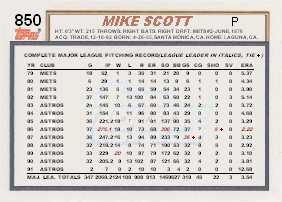 Mike Scott was a great pitcher during his career. He won 20 games, pitched a no-hitter, and almost led the Astros to the World Series in 1986. He recieved Topps cards for every year in his career, except for a sunset card. He only played in 2 games in 1991, but I think it still would've been fitting for Topps to put him in the 1992 set. Had he pitched a few more season and put up numbers like in his all-star seasons, we might be talking about him along with Jack Morris as players who should be in the Hall of Fame. This is the 2nd "star number" card in my set. #800 Dave Parker was the first.

I finished the back to card #1103 today. I think I might just go ahead and finish all the backs to the manager cards next time I have a day off. They are difficult to do just because Baseball-Reference doesn't list the win totals for managers if the managed a partial season, they list the clubs' 162 game record. It's stupid and has thrown me off a tad as I have to research Wikipedia and other sources and then waste time on math to try to have a managers win-loss record for the back of the card. Might as well just try to get all of them out of the way so I don't have to deal with them anymore. I believe there are only 10 or so to go, and a few of them managed the entire 1991 season, so that will help.

I'm taking a mini-vacation starting today, as I am headed up to Alabama with my wife to see her cousin get married on Saturday. We'll head home Sunday as I have to be back at work at 5AM Monday. The life of a baker never ends....Hopefully I won't see too many obnoxious 'Bama fans up there. It will be nice to get away from everything, and I'm looking forward to stopping in Talahassee to eat at Harry's. Short story before I go. I lived in Lakeland, Florida for most of my life. We had a bar and grille called Harry's in our town forever. I may have even won a gift card there at a Minor League game. I never went. Then in 2014, me, my wife, and 2 of our friends were in St. Augustine and there was a Harry's there. They do New Orleans-style food, and when we saw that they had red beans and rice, we decided to eat there. I got a catergory-5 hurricane to drink with my meal, and I don't remember eating half of it because I was pretty much buzzed, but the parts I do remember, the food was great. Half a year later, we are in Talahassee visiting my wife's brother, and he takes us to eat at a Harry's up there. I got the red beans and rice again, and it is amazing again. I looked at their website to see if there were any near us. Turns out that there are only 5, including the one in Lakeland, one in Ocala, and one in Gainesville. At the time, my wife had been going up to Gainesville for surgeries quite frequently, and one of those times, we checked the Harry's in Gainesville off our list. We haven't been to the Ocala one yet, but hopefully soon, and next time I'm in Lakeland to see my Dad, I hope to go to the Harry's that I've driven past a dozen times but never ate at. The one in Talahassee is nice, and I'm looking forward to a nice plate of red beans and rice and a nice tall diet coke (although after a 5 hour drive, a hurricane probably won't be sounding too bad).
Thanks for checking out my latest post.
-Jeremy

Posted by Jeremya1um at 7:48 AM No comments: