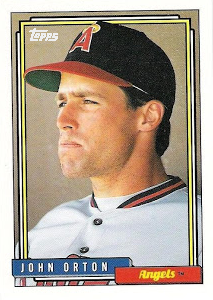 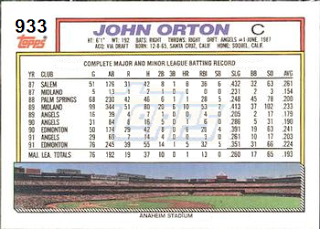 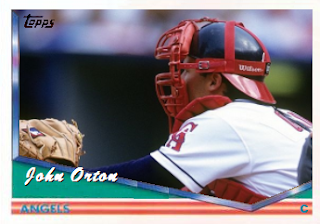 As for the '92 card, John was left off of the 1992 Topps set, but got a card in the 1992 O-Pee-Chee set, which is the same design as the '92 Topps set, just with the OPC logo. O-Pee-Chee would always choose not to copy the All-Star and Record Breaker cards for their sets, instead choosing to add more Montreal Expos, Toronto Blue Jays, and random other players in their spots. Orton got a card in the '92 OPC set because of this, so all I had to do to make his card was to take off the OPC logo, and add a Topps one. The back was a little difficult, but I think I did ok.

It has been a long while since I've posted on this blog, but having a 2-year old can take up most of your time. Probably since my last post here, I have finished the 1998 Topps set, started working on the 1984 Topps/Topps Traded sets, added a few checklists for '70's sets on my other blog, as well as start the 1993 Topps set until the '84 Topps set came up with a deadline of February. I will still keep posting on here every now and then, so check back, and you never know, you could see a new card up.

Thanks for checking out my latest post.
-Jeremy
Posted by Jeremya1um at 1:02 PM No comments: