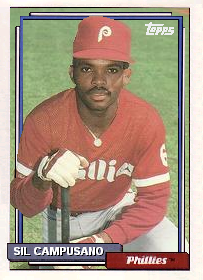 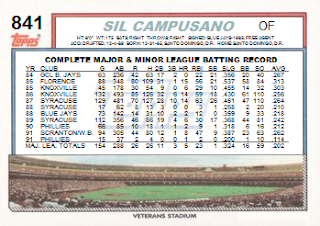 APPEARANCES IN FUTURE TOPPS SETS: None

REASON LEFT OFF OF THE 1992 TOPPS SET:  I would say because he only appeared in 15 games is why. 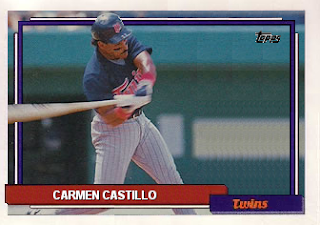 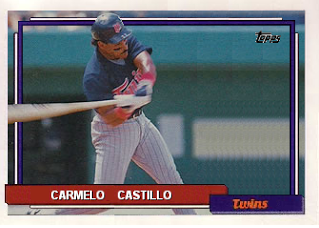 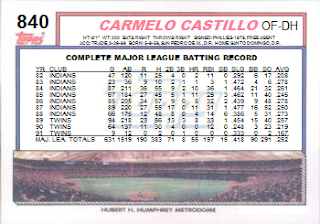 APPEARANCES IN FUTURE TOPPS SETS: None

NOTES:  This would've been Castillo's sunset card, although he did spend some time in Japan after MLB. This card was a little tricky for me once I started making the back. I went to Baseball-Reference like I usually do to get the stats for the back, and I typed in 'Carmen Castillo' and the search didn't find anything. I typed it in on Google, and it found me tons of cards, but then I noticed that some of his cards were listed under 'Carmelo Castillo'. I typed that into BB-Ref and that gave me what I wanted. I guess he was known by both names. Most of his Topps cards before 1990 have him listed as Carmen.  His '90 and '91 cards have him listed as Carmelo. I had originally had the front of the card with his name listed as Carmen, but I changed it to Carmelo so it would be like his final 2 Topps cards. I have both at the top of the post.
One final note, Castillo won a title with the Twins in '91, and not many '91 Twins are missing from the set surprisingly.

Thanks for checking out my latest card.
-Jeremy
Posted by Jeremya1um at 8:15 AM No comments: 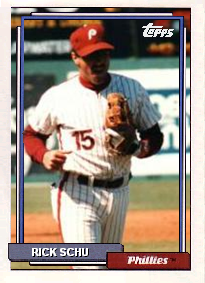 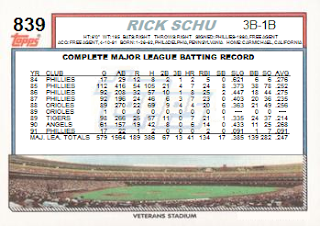 I'm trying a new format on this blog and changing things up a little. Please feel free to leave input.

APPEARANCES IN FUTURE TOPPS SETS: None.

Thanks for checking out the latest '92 Topps card.
-Jeremy
Posted by Jeremya1um at 8:25 AM No comments: 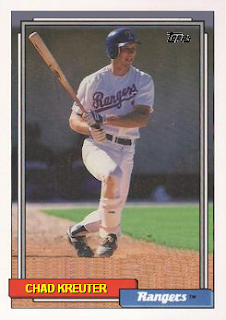 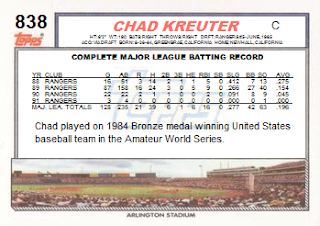 I think if Chad would've got a little more playing time in '91 he could've made the '92 set, but Ivan Rodriguez and Geno Petralli were in the fold, so it was kind of hard for him to get playing time that year. He got a decent amount of At Bats with the Tigers the next few years, as well as during his time with the Dodgers, and what do you know, he got cards for those seasons. I think Chad was just a classic case of Topps putting players who were starters or received more than 100 At Bats on most of their cards.

I've been working on backs a good deal, and am almost finished with every card on the first checklist (793-940). Not much if you consider the number of cards in the rest of the set (once I hit card 940, I will have 427 more to go), but it is a small dent and it's nice to complete a goal, and doing every card on a checklist front and back is no small project. I've learned a lot about some of these lesser known players that Topps didn't include in the set, and Trading Card Database, Baseball-Reference, and Google (for pictures) have been invaluable resources in this project. If you ever decide to try your hand at making customs, these resources as well as a good photo editing program should be basically all you need.

Thanks for checking out the latest 1992 Topps card in my set.
-Jeremy
Posted by Jeremya1um at 7:43 AM No comments: 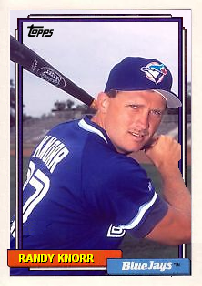 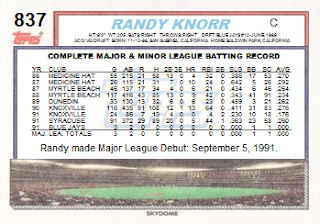 He went on to coach with the Washington Nationals, and I got to meet him and get his autograph in Spring Training (2007, I believe). He was nice and signed a few cards for me. Wish I would've had this card to show him.

I'll probably work on some backs tomorrow after work. Hoping to knock those last few out of the way before I have to figure out what the backs to the season highlight cards are going to look like. It will probably be a combination of the back of the record breaker cards and possibly the all-star cards.
We will find out soon enough. Thanks for checking out my latest card.
-Jeremy
Posted by Jeremya1um at 12:36 PM No comments: 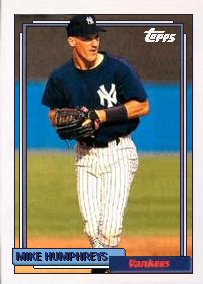 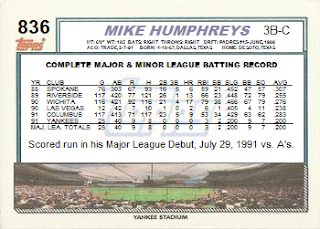 Mike Humphreys is the latest card in the set. He never appeared in any main Topps sets during his playing career, but did get a '92 Topps Debut card, a '92 Stadium Club card, and a '93 Team Stadium Club card. He appeared in Donruss, Fleer, Pinnacle, Score, and Upper Deck sets in '92, but for some reason, didn't get a Topps card.

Mike played in 25 games in '91, 4 in '92, and 25 in '93 which was his last season. He did manage to hit a Home Run in '93. This 1992 Topps card would've been his rookie card, and first of 3 he would get if Topps put him in their base sets. He put up some good power numbers in each of his first 3 Minor League seasons, so you would figure he would've appeared in the '92 set, especially after getting a Bowman card in 1991 and getting a '92 card from every major brand except for Topps and Bowman.

I had to fix the front of this card after I was doing research and realized I spelled his last name incorrectly. Or maybe I should've left it and made it some special SP card and it could've been like some of the gimmicky crap Topps is giving us 24 years later.

I'm slowly but surely making backs to the set. I'll probably make a few Thursday or Friday. Next up will be a player I met during one of his last years in the Bigs and a good candidate to get a managerial job in the future. Thanks for checking out the latest card.
-Jeremy
Posted by Jeremya1um at 6:46 PM No comments: 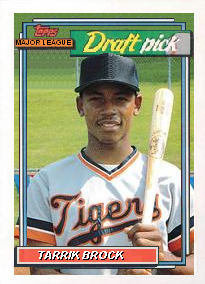 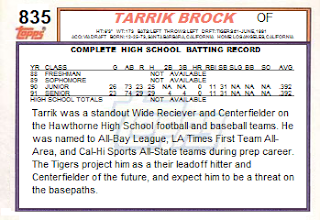 Tarrik never made it to the Bigs with the Tigers, but did make it to AAA with them. I actually saw Brock play in the Minors in 1996 while I was living in Lakeland, Florida and he was playing in low-A ball with the Lakeland Tigers. I probably went to 5 games that year and got his autograph on a pennant, which is hanging up in my man-cave. After the '96 season, Tarrik was selected in the Rule-5 Draft by the Mariners. He stayed with them until 1999, when he signed with the Rockies before the season started. In July that year, he was traded to the Cubs, and then in 2000, he reached the Majors, playing in 13 games with them, getting 2 hits and stealing 1 base. He spent 2001 with Elmira in the Independant League, and spent 2002-2003 in the Dodgers system before retiring. After his playing career, he started coaching in 2006 with Ogden. Then from 2007 to 2013, he was the Marlins outfield and baserunning coordinator. He was their interim 1st Base Coach in 2010. In 2014, he was back in the Majors again, this time as the Astros 1st Base Coach. 2015 was spent as a Padres Minor League Coordinator, and this year, he is the Padres 1st Base Coach.

I consider Tarrik part of my Favorite player collection, but only have 1 of his cards, a 1991 Classic/Best Minor League card. One of these days, I'll try to print out this card and make it card #2 in my Brock collection. I will also probably make his 2001 Topps card, finishing up Tarrik's career Topps run (although I may try to add him to a few prospect cards in the '93-'97 sets).

Thanks for checking out the latest card in my set.
-Jeremy

Posted by Jeremya1um at 5:02 PM No comments: 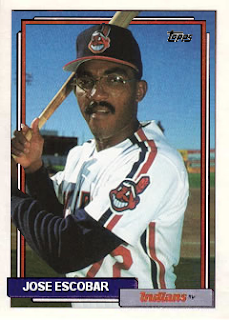 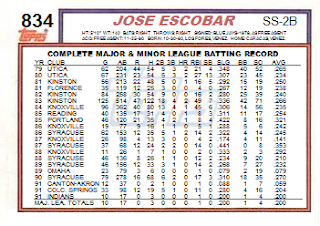 Card number 834 in my custom 1992 Topps set belongs to Indians infielder Jose Escobar. Jose started playing professional ball in 1979 and finally made it to the Majors for the first time in 1991. It would be his last pro season. I couldn't find much about his career, but from the looks of it, I'm assuming he was a no hit, good fielding middle infielder.

Jose had only 2 cards in major brands during his career, a '91 Bowman and a card in the '92 Topps Debut set. He does have a variety of Minor League cards. This card would've been his first and only Topps card as he only spent 1991 in the Bigs.

I got a few packs (3 regular and 1 jumbo) of 2016 Topps yesterday and did ok. Got a few First Pitch inserts and pulled a jersey card of Corey Kluber (who went to college at Stetson University in DeLand, Florida just a few blocks away from my apartment). I did a post on my other blog with pictures if you want to see it. Thanks for checking out the latest card.

Posted by Jeremya1um at 7:56 AM No comments: